Welcome back to another post where I brag about my Great-Grandmother Llewellyn Thorward-Moore. Ha! Sorry, but I had to do it. As you all know, I’ve been doing my Genealogy Do-Over for the last few months. In the process of that, I’ve been revisiting all the wonderful things that were in what I’m calling “Llewellyn’s Boxes.” In those boxes were a bunch of bibles. Not all of them were Llewellyn’s and they don’t all have names in them, but I thought it would be cool to highlight one a week here on the blog.

The first one we’ll look at is what I will now refer to as the Dora Plume bible. Dora was the sister of my 2nd Great-Grandfather, Lewis Thorward, and the only daughter of George Thorward and Josephine Doremus. The Bible itself was actually in a box with the publisher’s name on it. You can see in the top left photo that it is an Oxford Text Bible. The top right image is the bible itself taken out of the box. The bottom left photo is the bible sitting in the box. Finally the bottom right photo is the goodies that were UNDER the bible. That’s right I said goodies! Can you imagine if I hadn’t of opened the box? If I had thought, oh its just another bible.

The collage above shows what was found underneath the bible. It clearly shows a name card for the Order of the Eastern Star. I know that Llewellyn was also a member of that organization. Three obituaries were found, George Thorward (Dora’s Father), Josephine Thorward (Dora’s mother), and Lewis Thorward (Dora’s brother). All of them died in the 1940s. I can’t be sure about the images but I’m leaning to think that the woman in the tintype is Josephine Thorward. I have a picture of Josephine’s mother also and I don’t think that is her. I will have to pull out the other photos I believe to be Josephine and compare them.

As for the boys, I know for a fact that they are not Dora’s brothers Frank and Lewis. I can spot Lewis in a line up with my eyes closed! Dora didn’t have any sons, she just had one daughter. That leaves the possibility of it being her husband, Leslie Plume, and one of his brothers. He had four of them that I know about. They were all quite a bit older than him, the closest in age being 16 years older than him. Those boys do seem to have an age gap between them. Looks like I will have to research how to distinguish time periods! 🙂

Here’s the last picture for this bible, in case you were wondering how I surmised it was Dora’s bible. I didn’t just guess because of the name card and obituaries, I promise! Gosh, I’ve always felt attached to this couple in my family tree and it makes me smile seeing this little note. Despite that attachment, the dates of death and place of burial for them are still a mystery to me. I’m going to be working extra hard to figure out that this time around. Back to business! The bible is in almost perfect condition. One of the ribbons is even still marking a page. There is no damage that I can see and no markings either. This is definitely one of my favorite heirlooms!

I can’t wait to show you all the next bible!

Treasure Chest Thursday is a daily blogging prompt at GeneaBloggers.com

I was watching the latest episode of Ghost Hunters this morning. They investigated the Stephen Crane House in Asbury Park, New Jersey. It really got me thinking about those extra branches of the family tree. For the record, this isn’t a random subject. There is thought and a little documentation that Stephen Crane was related to the Thorwards through the Plume family. I even think the Cranes married into the Plumes. So it’s never going to be a blood relation for me. Does that really matter though? How interesting is it to see how we all connect together in these ways. Don’t get me wrong, I think it’d be cool to be related to someone who has their own Wikipedia page. Wikipedia pages are the scale in which I judge things if you didn’t notice. (^.^) I refuse to be caught into the trap of searching only for those things though. All of my ancestors are special and memorable in their own rights, I don’t value any over the others. Does that mean I should just stick to my main line and forget about all those beautiful branches? 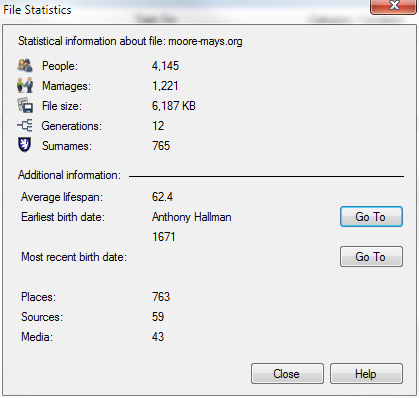 Who do you leave out? Where do you draw your line? How can you make that decision and not regret it when the tree winds back around? How sad does a tree look when it’s not full and brimming with many leaves and branches? I just can’t imagine it. I’ve always been torn on this issue and I’ve even had to clean out my family file a few times because I did get a bit carried away. One day I got real ornery and told myself no one gets excluded! Everyone plays on this team! Since that day, I’ve made a point to note the families of people who marry into my related families. To compromise with the saner part of myself, I don’t go in depth on these families. I find the parents of the person who married in. Most times, I try to find their birth or death records and any census information I can find. I make sure to note all the siblings of the person who married in. That’s a practical thing though. If you’d ever seen my family file, you’d know how many brothers and sisters married the brothers and sisters of their in-law. (Mays, Slusher, Click, Whitt families; I’m looking at you).

I just don’t know if I’ll ever resolve myself to excluding people. Whether it be a first cousin, fifth cousin two times removed or someone who is the brother of the spouse of my 8th cousin; everyone is welcome in my tree. Someday I may even learn your story. Everyone deserves their story told, and I’m determined to find them. I’m realistic though, I know I can’t do this for everyone. That’s why many people stick to just their main line. I understand their thought process completely, I just don’t know if I could limit myself in that way. I’ve always been a collector. It just seems now I’m collecting people instead of toys and books! My only question is, How on earth will I manage when I get married? Even more people, I’ll need to have an office just for my genealogy for sure!

As I’m sure you’re all familiar with, it’s a big triumph to find pictures of your ancestors. I’m very rich indeed with priceless photographs. I have hundreds and hundreds… and hundreds of photographs to scan and identify. I’m not complaining, really I’m not. I can’t tell you how privileged I feel. I love finding photos like this:

Photos like this just make me want to dig in and figure out who is who! I see Lewis and Jennie (holding my Grandpa Moore!), William and Llewellyn… Then there are those other pleasant folks. Now who the heck are they! I don’t know. I do recognize that couple. They are in my hundreds upon hundreds of photos. Not all of them of course, but they are in a great deal more than a lot of other people. So they have to be important, right? Then it struck me. Mr. Mystery there has a resemblance to Lewis Thorward. So I start thinking to myself, Lewis had a brother! That’s right! It’s got to be him. Let me check my file and see.

Alright, so maybe it’s not Lewis Thorward‘s brother, Frank, after all. Frank didn’t have a daughter and I’m almost sure that’s why the girl is in the photo. Wait a second… Lewis had a sister who had one daughter! Maybe it’s his sister and her family!

Gosh darn it! Another negative identification. Vivian Plume would be into her 30’s by the time this picture was taken.

Not only did they take the photo once, there are more than one of the same people. To you this means nothing but they wanted to do another one, just in case. To me, this is finding this photo again a few months after I scanned the first one. Which once again has distracted me from my Great Scanning Project. Which has been underway for well over 2 years now, if not more. I can’t just put them in the ‘Scanned’ box and leave it this time. I have to have SOME resolution. Even if I’ll never be 100% sure. Then it struck me that in Llewellyn‘s journal, she mentions her Aunt Agnes an awful lot.

So I check out Agnes Love‘s family. Sure enough, she had a daughter who seems to be about the right age. I can’t be sure because I am never good at judging children ages. She’s close though! Not to mention the boys are old enough to have their own families or maybe stayed behind during a family trip. Agnes and her husband were living in Suffern, New York around the time of these pictures. To me, this is the conclusion that will allow me to go back to scanning. Even if I have taken an hour out of my time, not only to research but to type this blog post too. I’m nothing if not easily distracted folks.

There is good news though. Eventually someone, and I’m not saying who (Great Grandma Llewellyn)..

Someone started labeling the back of the photos. Now for the other 764.75 pictures that aren’t labeled? I should figure those out by the time my Great Grandchildren are moaning the fact that I never take any pictures.

Find Me on Social Media