I have re-written this entry many times. I just can’t seem to grasp the scope of Nathan Mays and his big family without over complicating my narration. Usually when I decide to sit down and do genealogy research, I pick a random family and then I aggressively research that family through the census and any other documents that may be found online. Luckily for me there are a lot of Kentucky vital records on Ancestry.com and then Family Search has Ohio Death Records at my disposable.

The problem that usually pops up is I become limited by not being on site. Soon I hope to be able to start to take genealogy trips over the summer but that doesn’t help me today. When I inherited the information I have on the Mays family from my mother, Nathan Mays was listed with 19 children. Then when I started searching for death records, I discovered 2 more bring the total to 21. Oy!

The problem I eventually ran into was trying to line up all the different census years and compare the children listed. So I went to old school methods. I printed out blank census forms and I transcribed the family for each census. 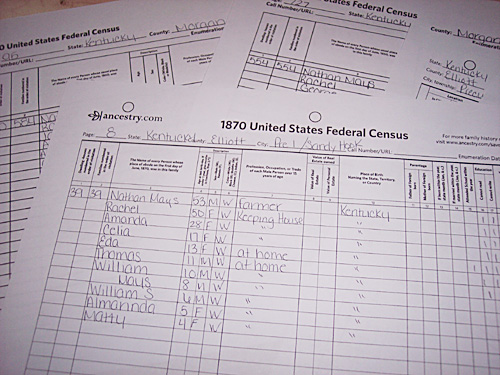 Before my journey into this family this weekend, I had only found Nathan’s family in 1860 and 1870. However, I was able to find them all the way to 1900 on Saturday! I was excited to see Nathan’s wife in 1900 because it showed me something that immediately helped me.

Rachel is listed of being the mother to 15 children, with 9 still living. Obviously there has been some misunderstandings in the record taking process. Not by the census, they didn’t add relationships until the 1880 census. By whoever had taken an accounting of the children. One thing that I should have taking into consideration was the age of Nathan and Rachel’s older children. Now that I’ve realized it, I can’t believe i missed it. As long as I’ve been doing this, I should have realized that even though Nathan and Rachel were still producing children, that didn’t mean that their children were not. That’s not even taking into account when family members take in children of their family.

This is the 1880 census. As you can see, some of the children are actually Grandchildren. Now I just have to figure out who they belong to. However, this is going to take me longer than a weekend. I know that because it’s Monday and I still haven’t managed to track all those kids down. I’ll get there, but it hasn’t happened yet.

So here’s what Nathan’s family looks like in Family Tree Maker for me right now. I’m hesitant to move Molly and William anywhere until I know where to put them. I was already able to verify that one of the children (Mary I) was actually the daughter of Nathan’s daughter Mary J Mays-McClanahan. Mary J died of a ‘cold’ just 2 weeks after her 4 month old daughter died of an inflammation of the stomach. An incredibly sad story. 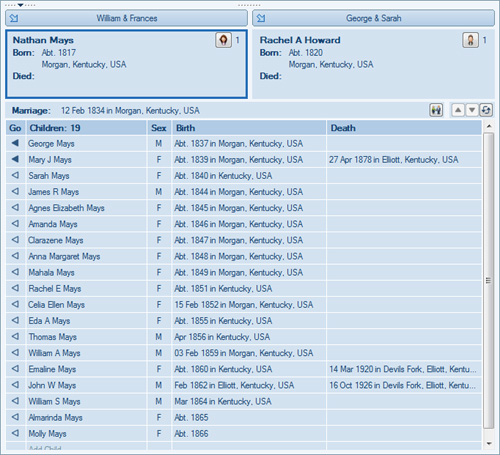 Edit: 5 hours after I posted this blog I was able to combine Celia Ellen and Emaline together after scouring the Kentucky records on Ancestry.com. This family is constantly changing. 😉

Find Me on Social Media